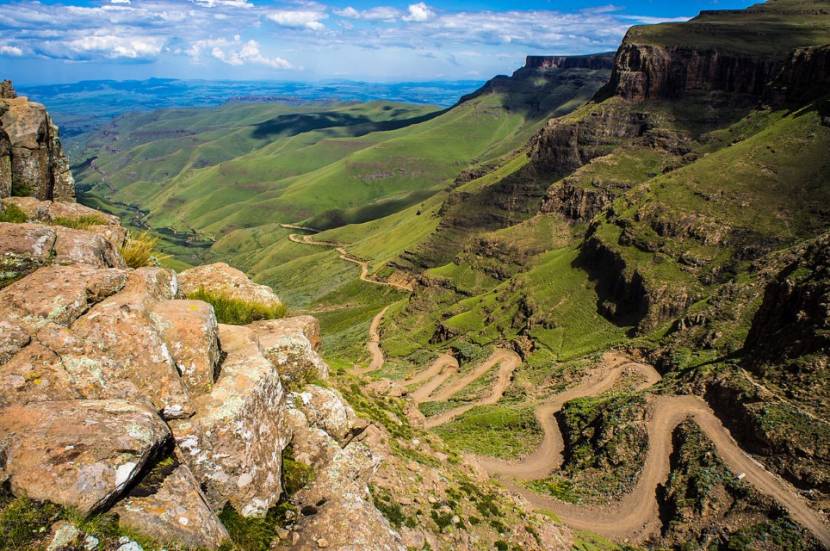 Sani Pass, elevation 2876m, is a mountain pass and border point between South Africa and Lesotho. The route up Sani Pass starts at 1544 m, and climbs 1332 vertical metres to an altitude of 2876 m. The road is a steep gravel road with gradients up to 1:3, which can be difficult to drive in bad weather and may be

covered with snow and ice in winter. By South African law only 4x4 vehicles are allowed on the road. Several tour operators run guided tours up and down the pass. The pass lies between the border controls of both countries and is approximately 9km in length. Caution must be exercised and motorists must be alert while navigating the pass as it has claimed many lives. Occasionally the remains of vehicles that did not succeed in navigating the pass's steep gradients and poor traction surfaces can be seen. While South African emigration at the bottom of the pass prohibits vehicles deemed unsuitable for the journey, the Lesotho border agents at the summit generally allow vehicles of all types to attempt the descent. The pass is often closed due to adverse weather conditions, especially during winter. The respective border control stations open at 6:00 and close at 18:00. The South African/Lesotho border is at the summit of the pass and not at the South African border control point. Sani Pass therefore lies entirely within South Africa.