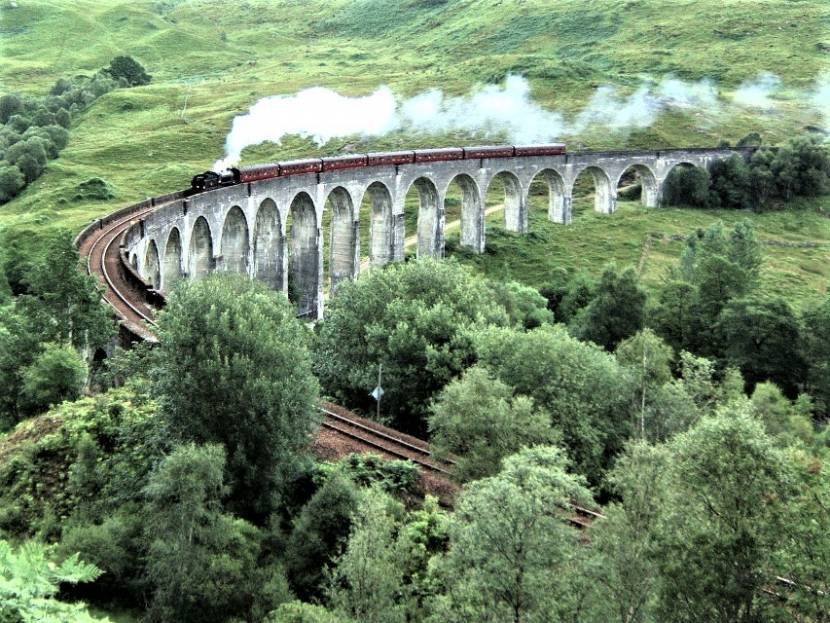 Glenfinnan Viaduct is a railway viaduct on the *West Highland Line* in Glenfinnan. Located at the top of Loch Shiel the viaduct overlooks the Glenfinnan Monument and Loch Shiel. It is the longest concrete railway bridge in Scotland at 416 yards (380m), and crosses the River Finnan at a height of 100 feet (30m). The viaduct is built on

a curve of 792 feet (241 m) and stands on 21 semicircular spans of 50 feet (5m). Glenfinnan Viaduct has been used by film industry in several occasions including Harry Potter films. The Glenfinnan Viaduct features on some Scottish banknotes.  **The West Highland Line (Scottish Gaelic: Rathad Iarainn nan Eilean - "Iron Road to the Isles") is a railway line linking the ports of Mallaig and Oban in the Scottish Highlands to Glasgow in Central Scotland. The line was voted the top rail journey in the world by readers of independent travel magazine Wanderlust in 2009.