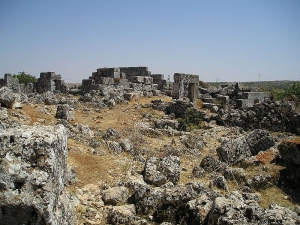 Bara (Arabic: بارة‎) also called Al-Bara is one of the former "Dead Cities", UNESCO World Heritage Site, in northwestern Syria. The settlement was established in the fourth century at an important trade route between Antioch and Apamea. Due to good location and excellent conditions to produce wine and olive oil, it flourished in the 5th and 6th centuries. When Muslims conquered the region and trading routes were disrupted and other Dead Cities were abandoned, Bara remained inhabited, most inhabitants remained Christians, and the town even became a seat of a bishopric subordinate of Antioch.